The axes are summarized in the diagram below, a modified map of The Hollows: 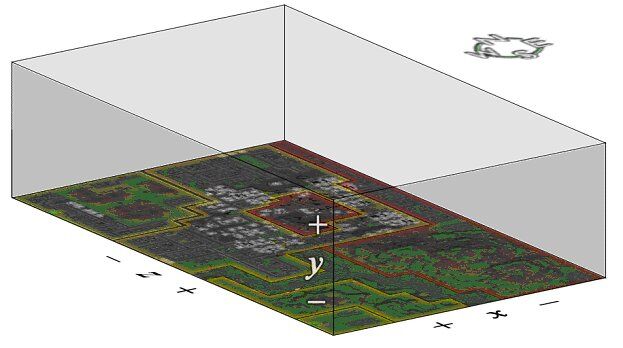 The origin of the maps (coordinates (0, 0, 0)) vary from map to map, and in some cases, is off the primary map area entirely.

Internally, the game tracks coordinates to six decimal places, or +/- 0.000001 feet (0.000012 inches). This is a high degree of accuracy, usually a degree that is not needed for practical purposes.

The simplest way to obtain one's coordinate is to type /loc on the chat command line. This will show one's coordinates on a map accurate to within 0.1 feet (1.2 inches).

If the /loc command will be used often, it might be useful to bind the command to a key. For example, if the L key is not being used in some other capacity, typing the following on the chat command line will allow a player to simply press the L key to gather his or her location:

Once the demorecord file is created, open it using a text editor and search for the character's or object's name you wish to get the coordinates of. The name should be contained on a line such as the following:

The second number in this line (32 in the example) is the identification number of the character or object. All coordinates related to this character or object will be contained on similar lines with this identification number, but with the POS command instead of NEW. For example, the following line may appear in a demorecord file with the previous example line in it:

Retrieved from "https://cityofheroes.fandom.com/wiki/Coordinates?oldid=71119"
Community content is available under CC-BY-SA unless otherwise noted.