There are two known badges for defeating Spectral Pirates in the Fort Hades neighborhood of Port Oakes. However, merely defeating the ghosts is not enough to earn the ghost hunting badges. In order to earn the badges, you must actually trap the ghosts.

How to Trap a Ghost[]

To trap a ghost, it must be defeated within a small radius of a ghost trap. The ghost does not necessarily have to be standing directly on top of the trap, but for best results, should be within short melee range of the trap. A picture of one of the traps and a ghost being defeated in its location is shown to the right.

When a ghost is successfully trapped, he will be engulfed in a green light that gets drawn into the trap instead of simply fading away as they normally do upon defeat.

There are six ghost traps in Fort Hades. The locations of the Ghost Traps are shown below: 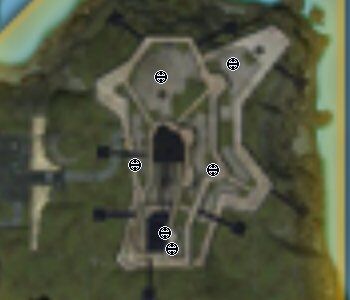