City of Heroes Wiki
Register
Don't have an account?
Sign In
Advertisement
in: Work in Progress, Game Background

This article is currently a work in progress. As such, it may contain some editing notes in addition to information. Please be patient, it is being worked on and will be in a finished state before long!
This article is about background events in the game. For important game updates and changes, see Timeline.

Timeline: From the First Day to the Present[]

Earth: The Goddess Merulina arrives from outer space to what will become later the Atlantic Ocean.[1] 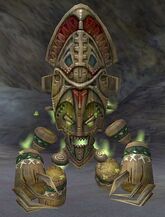 Date unknown, Mediterranean: First human tribes in North Africa and Oriental Mediterranean. Spirits reach godhood status, starting to require human believers and worshipers. These gods eventually form alliances and pantheons.
Some gods discover how to feed on pain and negative feelings of men instead of worship.[2]

Date and place unknown: The gods fight against those of them who feed on negative feelings of men. The goddess Tielekku learns the secrets of Magic and teaches them to other gods. Among her pupils are the gods Ermeeth and Hequat.[2]
The war ends when the evil gods are defeated and banished to the Spiritual Plane, making them known as the Banished Pantheon.[2]

Date and place unknown: The god Eermeth reveals the secrets of magic to his worshipers, the Oranbegans. As a result, they stop worshiping the gods. Tielekku and Hequat's faction fight Eermeth's followers, effectively forcing them to flee.[2]

Date unknown, Oranbega: An Oranbegan named Mu'Rhakmet gathers a number of followers and begins to demand a return of the people to the worshiping of the gods and the old ways. A civil war soon follows: Mu'Rhakmeth and his followers are defeated and forced to flee to the sea.[3]

14000 years ago, Atlantic Ocean: The goddess Hequat raises an island from the sea and grants it to Mu'Rhakmeth and his followers to build a powerful nation on it. The inhabitants of the island, the Coralax, are forced to leave. But one of his priests, Calystix the Shaper, summons The Leviathan to destroy the invaders. Hequat defeats the beast and imprisons it under the island. The nation of Mu is born.[2][4]

Date unknown: Following Hequat's orders, Mu finally attacks, and the civilizations of Mu and Oranbega war against each other. Only a handful of Muvians survive the conflict and are forced to flee; Oranbegans are reduced to spiritual existence and their city of Oranbega is physically abandoned.[2][5]

The Kheldian half of the being that will be known later as Shadowstar finds refuge in a priestess of an ancient Egyptian Moon cult, looking to leave behind the ways of the Nictus. Together they create the path of the Warshades.[7]

Outer space: The alien entity known as Shiva destroys the planet of the Arcosians[12]

Italy?,1529: Girolamo da Verrazano draws a map with the supposed location of the legendary Oranbega, in the American East Coast.[13]

Place unknown, 1592: In an unknown place the book is written that allows the summoning of a powerful demon called "The Envoy of Shadows"[14]

Rogue Isles: The sect known as "Children of Enos" colonizes the Rogue Isles, enslaving the local population[15]
America, Early 1600s: Expedition Novus Cartago; More evidence of Circle of Thorns activity.[16]
???: The Malta Knights separate from the Malta Templars.(17)
Italy, year unknown: Giovanna Scaldi is born in a little village near Venetia.[17]
Italy, year unknown: Strange events in Venetia: the whole city falls into a pit of hedonism and depravity.[17]
???,1602: Spells of the First Order, a translation of the first spells taught to men, is written.[18]
America, 1641: Village of Salamanca is established.[19]
Italy, 1698: Giovanna Scaldi dies in Venetia while she was waiting to be executed.[17]

Rogue Isles, 1718: the pirate Blackbeard harasses Fort Hades, conquering the fort and leaving behind no survivors. (107) When the French try to reclaim it, the hauntings begin.[20]
Rogue Isles, 1756: Huge influx of colonists from Europe and America arrive to the isles.[21]
Rogue Isles, 1760s: The Rogue Isles declare themselves independent from France. [21]

Europe, 1920s: Baron Zoria finds clues of location of the the Malleus Mundi in an abandoned Templar fortress (33)
Striga Isle, 1920s: The Family arrives to the Isle (34)
America, 1920s: The US Navy destroys a chapter of the Cult of the Shaper in the coast of Massachusetts (4?)
Paragon City, 1920s: A great number of skyscrapers is built in the jewelers' district. The neighborhood is rechristened as Steel Canyon.(35)
Paragon City, 1920s: Golden age of the Circle of Thorns, which grows and expands like never before. Baron Zoria finds an entrance to Oranbega.[13]

Paragon City, 1930s: The Freedom Phalanx wages a successful war against organized crime [25]. Some of the old families are destroyed as a result. (40)
Rogue Isles, 1930s (?): A great number of villains flee to the Rogue Isles, which become a haven for the supervillains. Among them, Arachnos infiltrates a number of cells.(41)
Europe?, late 1930s: Requiem finds and recruits Othman Doul, the man who will become the villain Vandal. (115)

Paragon City, 1932: the hero Atlas claps out the flames of a building in fire the firefighters couldn't extinguish by themselves.(43)
Paragon City, 11 July 1932: Brass Monday (44)
Striga Isle, 1932: The tanker Moraine vanishes without a trace on her first voyage. (45 & 101)
Paragon City, 1933: The hero Dream Doctor links the kidnapping of several kids to the Circle of Thorns, prevents their sacrifice and exposes the evil nature of the group to public light. The Circle as a public organization vanishes that same year.[13]
Paragon City, 1933: The first Geneva Hotel is built. (42)
Paragon City, 9 January 1933: The Midnight Squad is founded by the Dream Doctor. [13][24]
Paragon City, 1935: The Paragon Times building is built. (46)
Paragon City, 1936: City council and mayoral elections. There's a series of pro-hero candidates. Finally, a mayor and a city council tough on (organized) crime is elected. It's the end of the criminal empires in Paragon. (25,40)
Germany, 1937: Germany creates super-powered soldiers [25]
Paragon City, 6 January 1937: The heroine Maiden Justice is sued by the very criminals she arrested. (47)
Paragon City, September 1937: The Citizen Crime Fighting Act is passed, legally authorizing masked heroes to arrest evildoers. [25]
Paragon City, 12 September 1937: First legal arrest made by a hero. (48)
Europe, 1939: Second World War starts. Armies include metahumas or groups of them: The Dawn Patrol in England, Storm Korps in Germany, Imperial Wind in Japan. [25]
Paragon City, 1939: A parade honoring the hero Atlas is sabotaged by the hero's nemesis, the villain Teal Serpent. The plan is frustrated and the Serpent defeated. (49)

British Isles, 1940: Battle of Britain. The Dawn Patrol helps the RAF fight the Germans. [25]
America?, 2 May 1940: Tammy Arcanus (Numina) is born.[24]
Pacific Ocean, 7 December 1941: Japan raids the US Navy base in Pearl Harbor. [25]
Paragon City, 7 December 1941: A group of German supersoldiers attacks Independence Port, base of the program of lend/leasing of war equipment to the troubled British Isles. Despite the huge material and human damage they cause, the hero Atlas stops single-handedly the attack, losing his life in the process. [25]
America, 1941: The United States declare war on Axis powers. [25] Laws are modified to legally allow masked heroes to enlist and fight (25).
Rogue Isles, 1941 (?): The Rogue Isles declare themselves neutral, but with Allied leanings. Rogue Isles Army wages a visible "war" on 5th Column members. (41)
Paragon City, 1942: The US Army opens special training facilities for metahuman soldiers. [25]
Paragon City, 1942: First Hero Brigade formed. [25]
Paragon City, 1942: A force of the Fifth Column, apparently the same who attacked Independence Port, attacks the Hero Brigade in Liberty Plaza as it was getting ready to depart to Europe. [25]

Africa, 1942: First Hero Brigade fights in North Africa, being defeated and reformed in small cells soon after [25]. The Dream Doctor forms a cell called The Sand Kings, who performs numerous acts of sabotage and kidnapping against the Nazi forces. (25)
British Isles, 1942: The Storm Korps attack Buckingham Palace, briefly kidnapping the King [25]. The Storm Korps are re-deployed in North Africa. (25)
Pacific Ocean, 1942: The metahuman forces of Japan and America clash against each other repeatedly. The conflict turns personal and the members of both forces become obsessed with defeating each other, creating a parallel, meaningless war. [25]
England, 28 October 1943: Dawn Patrol is formed.[25] Note: This date is contradicted by other sources.[32]
France, 1944: Normandy Landing, where the Dawn Patrol and Freedom Phalanx land in the first wave.[25] The Storm Korps defend the German positions. Both sides suffer huge losses, including Statesman, who won't be able to fight during the rest of the war. (25)
Germany, 1945: Storm Korps and the First Hero Brigade fight in the black forest. [25] Only five of the soldiers of the Storm Korps survive to be judged. (25)
Germany, 1945: The Storm Korps soldiers are judged found guilty of war crimes. [25]
Japan, 1945: Nuclear bombing of Hiroshima and Nagasaki. [25] Japan surrenders soon after, but the Imperial Wind refuses to stop fighting. (25)
Pacific Ocean, 1945: The leader of the Imperial Wind, Lord of Frosts, fights the leader of the American metahuman forces in the zone, Captain Volcano, defeating and killing him. [25] Lord of Frosts eludes pursuit and escapes. (25)

America, 1946: Nemesis attacks Washington and declares himself "Emperor of the Americas". He's fought and defeated by the Freedom Phalanx, being forced to flee once more. [25]
???, 1946: The adventurers Lars and Tobias Hansen are captured while they were investigating a strange Italian cabal called "The Council" (52)
Paragon City, April 1946: Atlas Park inaugurated. (42)

America, late 40's: Many veteran heroes turn to a life of crime, being Paragon City one of his favorite targets. The rise in villains' numbers cause a rise in heroes' numbers as well. [25] 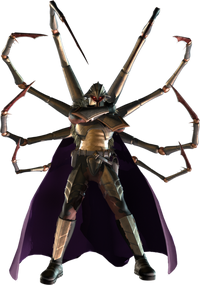 ???, 19 Febrary 1984: Gaussian is born.[24]
Paragon City, 25 June 1984: Clarissa Moore (War Witch) is born.[24]
Paragon City, 1985: Tub Ci arrested for heroin dealing. (60)
Paragon City, 1986: The Midnight Squad discovers the laboratory where the Superadine is being created. Back Alley Brawler assaults the place, giving all material found there to the Freedom Phalanx. (25 & 104)
Rogue Isles, 1986: Statesman attacks Lord Recluse by himself (109)
Paragon City, 7 or 12 July 1988: A Freedom Phalanx researcher, Dr. Brian Webb, publicly announces the discovery of technology able to pierce the interdimensional barrier. Planar travel is born. (25 & 68)[24]
Axis America, 1989: Dr. Webb and his expedition are captured, tortured and killed by an extradimensional Nazi copy of Statesman, the Reichsman. [25]

Outer space, 1989: A multinational force of heroes launches an attack against the alien entity known as "Shiva" in deep space. The heroes are never seen again.[12]
Rogue Isles, 1989: A rain of meteorites falls on the isle of Bloody Bay, leaving it inhabitable. [23]
Paragon City, 1989: The Nazi supersoldiers of the Reichsman invade Paragon City. (25 & 106) The Freedom Phalanx confronts and defeats them. [25] Reichsman captured and imprisoned. (25) Portal Corp installations result destroyed in the fight. The widow of Dr. Webb starts a long legal battle to retain control of the now ruined firm. (25)
Rogue Isles, 2 April 1989: The Night Widow Belladonna Vetrano (Ghost Widow) dies during a disastrous Arachnos operation against the Family. Only a single member of the whole Arachnos force survives. (69)[24]
???, 30 October 1989: Pandora is born.[24]

Paragon City, 2000: The Hollowing. (76)
Paragon City, July 2000: Art History student Vanessa DeVore travels to Italy to study in Florence. [17]
Italy, 2000: During a weekend trip to Venice, Vanessa DeVore buys an old porcelain mask and uses the mask for the first time. Frightened by the power of Giovanna Scaldi, Vanessa resolves to never touch the mask again, and moves back to Paragon City. [17] 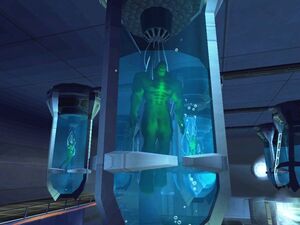 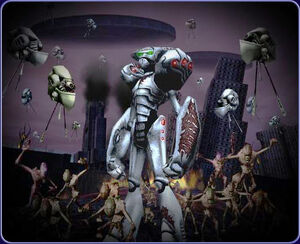 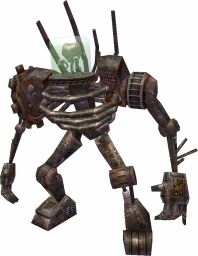 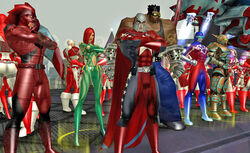 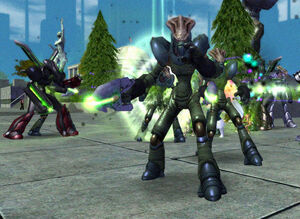 Still to be added[]

These are the events still in need of concrete date and/or place:

To avoid any confusion, the source of any given event can be found here. These entries should be converted to wikipedia:Footnotes format (aka inline REF tags).

Please note that the conclusions reached in this article are based on the facts and clues discovered in-game. If those facts turn out to be false in a later date (as it was Statesman's origins history, for example), then this page will need to be redone.