Lady Grey is the Vanguard leader. She can be found as an ally that must be protected in two different missions.

When found in the Help with Conference Security mission, she will have a faction of Vanguard Shield and a rank of Henchman. She will have been captured by the Nemesis Army and will need to be assisted and freed from her captors. She will join you for the rest of the mission as an ally. Once you free her, a wave of Nemesis soldiers will attack her. Being a mission objective, you need to free her, but not to escort her. She must survive the whole mission, though.

Her second appearance, during the mission Spring the trap on the Renegade Swords is a bit different: Lady Grey will be found captured by the Vanguard renegades, and most of the mission will be clear. But once you free her, you'll be rewarded with a cutscene and then the mission will be fully spawned, including several Vanguard bosses. During this mission Lady Grey is once again a Henchman and has the same attacks she had during her first appearance. She must be protected and escorted to the mission exit. Since Vanguard Sword mobs possess several AoE attacks, it's a good idea to pull Lady Grey's captors away from her when you move in for the rescue to prevent her from being killed during the fight. As Lady Grey is highly aggresive but has low Hit Points, it is also possible that she will be defeated and the mission will fail if you are sent to the hospital. Vanguard soldiers are very tough, and it is advisable to plan the mission carefully.

Heroes and villains may find her:

Ever composed, ever mysterious, the powerful and otherworldly Lady Grey is rumored to be older than Statesman, and one of the most powerful meta-humans on the planet. She was instrumental in the founding of Vanguard, and runs the organization expertly. She takes a great interest in Vanguard's day-to-day operations, and knows all of her troops by name.

During the mission Help with Conference Security, she will confront Nemesis in a cutscene: 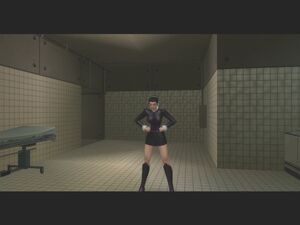 Then she will fight the Nemesis Army attackers:

Fake Nemesis: They are merely cogs in the great machine of Nemesis.
Dragoon: For Lord Nemesis!

Lady Grey: Ah, Character, and just in time.
Fake Nemesis: To arms, lads! Have at them!

Once free: The gall of that foolish old man! Well, let us clean up this mess.

During the mission Spring the trap on the Renegade Swords she'll be the bait to ambush several groups of renegades. She will be captured by a group of renegades and will need to be rescued:

Lady Grey: We are becoming most exasperated by these attempts on Our person.

Once free: Let us finish this unpleasant business.

If left behind: Character, We have lost track of you.

If refound: Let us put that behind us and carry on.

At the mission exit: An admirable performance, Character. We shall see you back at headquarters.

Apparently, Lady Grey is a Dark/Dark Defender, using a variety of Dark powers, including a pet:

Retrieved from "https://cityofheroes.fandom.com/wiki/Lady_Grey_(Ally)?oldid=91486"
Community content is available under CC-BY-SA unless otherwise noted.