The Lineage of War Edit

This is the name given to the Rikti homeworld's military caste. (1) This caste is said to be very small in the Rikti Homeworld, only rising to prominence during a very few infrequent civil wars and insurrections. Their last big operation was against an alien force called the Battalion about 100 years ago. Since then, their power had been tapering off to its normal ceremonial levels until the start of the war with Earth. (1)

It is conjectured that on the Rikti Homeworld, the military is a small minority of Rikti population, and that the Rikti civilian government could have far more power. On Earth, however, the Rikti military are all anyone knows, since the vast mayority of the invasion force is obviously formed by military. (2)

Other than this, the only fact known is that the Lineage of War uses a Rikti language called Mortal. (5)

Politically, the Lineage of War members present on Earth are almost with no exception Restructurists, they are focused on advancement through military accomplishment and swell their ranks with converted humans.(2) While there are exceptions among them (7 & 8), they seem to be rare. 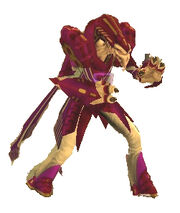 The Traditionalist Rikti see in this way of thinking a menace not only to Earth but to the Rikti Homeworld, which could end up becoming a military dictatorship. The Restructurists of the Lineage of War need the continued war to justify their changes, and are unlikely to accept any peace. (2) Continuing the war and winning it would allow them to build a society they could rule (4)

The current leader of the Lineage of War, a young genius called Hro'Dtohz seems to wholeheartedly follow this agenda, which makes a lasting peace with the members of the Lineage of War present on Earth nearly impossible. Despite these facts, it is unknown how many of the Rikti troops of the Lieage of War present on Earth know the truth about the true nature of the Rikti War and which would be their reaction if they'd learn about it. (8 & 9)

Retrieved from "https://cityofheroes.fandom.com/wiki/Lineage_of_War?oldid=83813"
Community content is available under CC-BY-SA unless otherwise noted.