Lord Recluse is the villainous leader of the Rogue Isles in City of Villains.

The Master of Evil, the Count of Cruel, the Archvillain of Anarchy. Lord Recluse has been called many things. But the people of the Rogue Isles know him as their lord and ruler. Lord Recluse has a mysterious tie with Paragon City's own Statesman - some even claim they were once close companions. Their hatred for one another certainly belies a secret perhaps best left buried.

Lord Recluse began his life as the technocrat named Stefan Richter, an American of Austrian descent. His father, an Austrian immigrant named Rudolf Richter, took it upon himself to care for Marcus Cole, whose mother had died in childbirth while his father drank himself to death. Stefan and Marcus soon became best friends, and served together during the Great War.

During the war, Marcus was exposed to the deadly German mustard gas, and his lungs became chronically ill. In hopes of finding a cure, Marcus and Stefan became mercenaries in search of the fabled Fountain of Zeus. After stealing an ancient Greek scroll, an early version of the Herodotus' "Histories", from a London museum, the two set out to locate a long-lost Greek island called Praxidae, which was said to house the mythical Well of the Furies, beneath which the Fountain of Zeus resided. After locating the island and drinking from the fountain, both Marcus and Stefan were endowed with god-like powers that rivaled those of the demigods from myth and legend, curing Marcus' deadly ailment. Before leaving the island, however, the two uncovered an artifact thought to be Pandora's Box. Upon opening the box, which stored all of the creativity of humankind for the last millennium, its power was released unto the world, effectively starting another Golden Age of super-powered heroes.

After the collapse of the cave in which the fountain and the box were housed, Stefan was washed into the open ocean. By then, Stefan came upon a revelation in which he would use his newfound power to pave the way to a new age of science for mankind, officially marking his descent to evil. After the events that took place on the island of Praxidae, Stefan joined a shady Italian-based organization named Arachnos, then lead by the mysterious figure only known as The Weaver, and was put in charge of the group's American branch based in Paragon City, Rhode Island. During his time within Arachnos, Stefan quickly climbed ranks and became known as the man called Recluse.

Physical changes also started appearing, with Stefan's eyes progressively beginning to have almost allergic reactions to bright light, and steadily growing red and burning with malevolence, a sign of his status as the evil demigod, Tartarus; his back, through Stefan's focused manipulation of his dark power, began developing a hump which later was used to house eight massive arachnid-like arms. Upon further enhancement, the arms were outfitted with super-strong steel claws, made from an alloy called proto-steel. Completing his transformation, he became known as Lord Recluse, and Stefan Richter was no more.

After Recluse's battle with Statesman (aka Marcus Cole) on Brass Monday, the evil mastermind went into hiding. During this unspecified time-period, through an assassination of the current leader, Lord Recluse usurped power. The assassination was carried out by the Red Widow, one of Lord Recluse's Night Widows. She was subsequently killed but lives on in a soul crystal, obtained by Ghost Widow, in Recluse's possession. Lord Recluse established his base of operations on the Etoile Islands, nicknamed the Rogue Isles, an archipelago off of the American east coast. 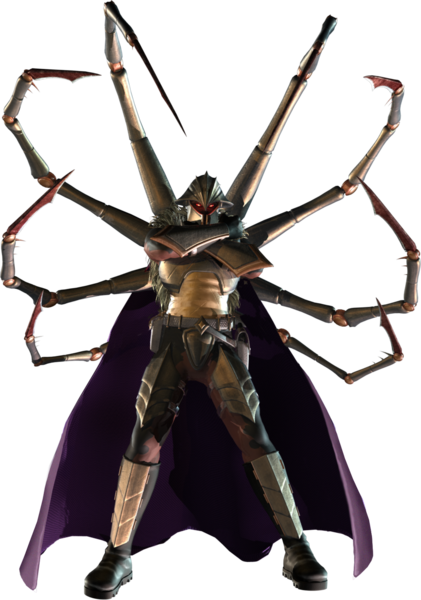 Heroes may fight him:

Villains may fight him:

Heroes confront Lord Recluse at the end of the Statesman Task Force; once his inner circle of villains has fallen, he will activate the Web:

During the fight, he will say the following:

At 75% Life: You're almost a challenge. Almost

At 25% Life: I will not be defeated in my hour of triumph!

After defeating a hero: You'll save nothing, hero.

Lord Recluse was the nickname of David "Zeb" Cook, the former Creative Director behind City of Villains at Cryptic Studios. David Cook left Cryptic Studios in February 2006 to pursue other opportunities. The mantle of Lord Recluse has now been given to Serdar Copur (Serdar "Lord Recluse" Copur).

Lord Recluse's powers are derived from the titan Tartarus. (p. 101, The Freedom Phalanx)