Secrets within secrets. Black helicopters and balaclavas. Shadowy agencies with limitless slush funds and black-hearted agents with licenses to kill. Hushed conversations on internet chat-rooms that mysteriously vanish. Men in black with blank identities and deadly women with a dozen passports. A high-tech paramilitary force divided into clandestine cells and dispersed around the globe– this is the Malta Group.

In a world of super-powered chaos and costume-clad adventurers, there are still mortal forces that try to control the storm. One such group is spoken of in whispers, even at the highest levels of power. Rarely seen, those who know of them detect their fingerprints staining the headlines with frightening regularity. Young heroes may never encounter these forces directly, but paranoid government analysts and conspiracy experts believe the Malta Group’s machinations are ubiquitous.

Veteran heroes who have encountered these heavily-equipped and highly-trained special forces warn of their resources and capabilities. These agents often disguise themselves with fake IDs and false names, claiming to be attached to real agencies (like the bogus NSA’s Suppressed Transmissions Office), or part of completely fabricated groups (like the KTU anti-terrorism agency). Yet no matter what their papers say, they have similar features in common.

Malta field agents are centered around the Tactical Ops team. These men resemble “future infantry soldiers”, armed with advanced assault rifles, tasers, fragmentation and web grenades. Officers may carry stun grenades as well, to disorient and paralyze targets. They wear cutting edge armor, such as electro-textiles that provide power to a wide array of built-in sensors (capable of detecting both the wearer’s vital signs and monitoring a target’s condition), all reinforced with flexible Kevlar plates.

Tactical Ops teams are often supported by an Engineer. In addition to their expert skills, they are able to deploy mini-field artillery with lightning-quick reaction speed. These autogun turrets have a rapid rate of fire and a sophisticated tracking system; once they lock on, they maintain a field of fire until the target is destroyed or out of range.

The most feared agents of Malta are their Sapper units. These battle-hardened soldiers are equipped with a Bio-Energy Feedback Inducer: a weapon designed in a top-secret laboratory, built specifically for hunting down and neutralizing super-powered beings. Heroes coined the term “Power Sapper” for these weapons and use it with fear, anger and disgust. A hero cornered by a Sapper will find he or she is unable to sustain most powers and will be easy prey for the Sapper’s back-up.

Malta also has a stable of veteran killers in their service. These wetwork agents are recruited early and put through a rigorous training regime. Despite their lack of powers, they believe they can take on a super-powered hero one-on-one. Due to their extensive close combat and sniper training, they are often right. Technically known as Special Qualification Marksmen, everyone calls them Gunslingers because of their cocky attitude and cowboy mentality. They are armed with high-tech pistols capable of firing a wide-range of specialized ammunition– all designed plainly to take down super-powered beings. Those who have battled them have reported explosive rounds, liquid nitrogen rounds (that freeze a target solid), incendiary rounds, hollow rounds and even poisoned rounds. The Gunslingers are able to switch ammunition in the middle of a fire-fight, keeping their opponents off-guard and hard-pressed as they work up to a killing blow. Finally, many Gunslingers are equipped with short-range teleporters, allowing them to get up close to a target before pulling the trigger.

The various Tactical Ops teams are organized in a cell-like structure, insulated, scattered and autonomous. This makes it hard to find out real information about the leadership manipulating the course of Malta, because each agent knows only wisps of compartmentalized information.

The Engineers of the Tac Ops cells are masters of technology. They maintain and repair all the equipment used by their comrades. In adittion to these responsabilities the Engineers are known to drop turrets in the fields, turning every battle with their cell into a killing field.

It has not yet been fully determined how the Bio Energy Feedback Inducer utilized by the Malta Sappers work, but it certainly does so efficiently it is clear this weapon was designed specifically for hunting down and neutralizing super powered beings of all sorts. Heroes in combat with them should be very wary.

Some of the most deadly Operatives in the Malta Group have been given the nickname Gunslingers. This name came into common usage not only because the agents use firearms, but because they also tend to have the same kind of cocky attitude and cow boy mentality that one associates with gunslingers in the old west.

The Hercules Class is the smallest Titan unit employed by Malta. It is believed that the technology used to create them came to this covert villain group sometime during or after the fall of the Soviet Union. It has not yet been determined if the Titans are simply robots, or something more. Their offensive capabilities are many and varied. 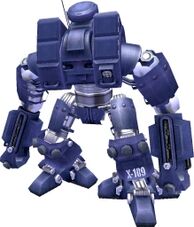 Any Gunslinger might be able to take down a super powered being, especially the experienced ones. Their mastery of the deadly weaponry and technology given to them by the Malta Group is complete. They complete the tasks assigned to them, taking pleasure in violence, especially when they get the chance to take down some heroes in the process.

The Tac Ops Commanders are the only members of their cell to have any contact with the upper echelons of the Malta Group. Secrecy and maintaining their cover identity is the primary directive for these agents.

The middle class of the Titans used by the Malta Group are even more deadly than their younger brothers. This stands to reason since they are two Hercules class units combined into a deadly enemy. They are equiped with the standard fragmentation, incendiary and gas missiles. In addition, the Zeus units combined plasma generators are extremely potent, firing multiple blast simultaneously. 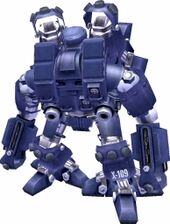 The Tac Ops Commanders are the only members of their cell to have any contact with the upper echelons of the Malta Group. Secrecy and maintaining their cover identity is the primary directive for these agents.

Moment is a shapeshifter currently working for the Malta Group. He may adopt different appearances, even non-human ones, apparently gaining the attacks of those forms. So far only two are found in-game. Despite the fact that these forms come under their respective factions, it should be noticed that this being works for Malta. Probably he has more forms. His true form is still unknown.

The ultimate eco-warriors, the Greater Devoured incorporate the biomass of fallen heroes into their monstruous forms. They rend foes with their slashing talons, spitting poison on those they can't reach. A Greater Devoured is a formidable foe, resistant to most kinds of attacks. Powers 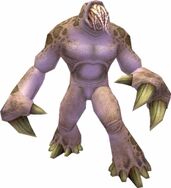 The Rikti battle armor is more advanced than any armor found on Earth. It offers the alien invaders protection from most normal kinds of physical attack. Armed with powerful energy weapons, these armored soldiers continue to pose a deadly threat to humans everywhere.

The mammoth Kronos Class Titans are the pinnacle of the Titan Project. Fortunately they are prohibitively expensive to manufacture. If the Malta Group can find a cost effective way of manufacturing these monsters, their terror will felt around the globe. 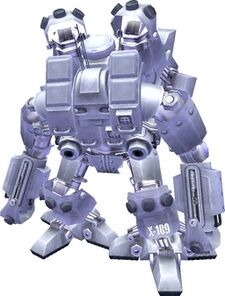 Note: This enemy is encountered in the final mission of the World Wide Red story arc from Crimson. It is identical to Kronos Class Titan, with the exception that it cons as an Arch-villain instead of a Giant Monster.

The Engineers of the Tac Ops team has constructed this Turret. Its defenses are surely formidable.