The Rikti Ship Raid is a zone event in the Rikti War Zone that pits players against the mothership of the resurgent Rikti and its most powerful defenders. It allows players to get elite badges as well as very quickly accumulate Vanguard Merits. Players must first defeat the established Rikti Pylons to cause the mothership to drop its shield. Players then battle it out atop the Rikti vessel and earn upwards Vanguard Merits for the defeated Rikti, often up to hundreds in a single run. The ultimate aim is to plant bombs in the ship's ventilation system, drawing out the Rikti Master At Arms U'Kon Gr'ai. 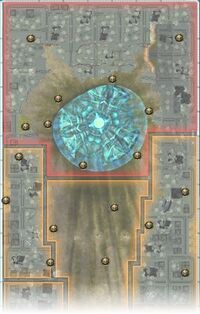 Anyone can participate to take down the Rikti Pylons that dot the land surrounding the ship. While these machines are tough, they can each be taken out by a single team of 8. There are 18 of these total, and defeating all of them will cause the force field surrounding the Rikti ship to drop.

One popular method of attacking the pylons is to gather all raid teams together in one location and run from pylon to pylon, taking each out one at a time. There will usually be one designated raid leader calling out pylon numbers (based on "special" markers that appear on the zone map) to coordinate the attacks. Employing this tactic, here are two commonly used orders of attack (others exist):

When the shield drops, hundreds of Rikti will spawn atop the Rikti ship. Each will be level 54, and their sheer numbers require a large group of Heroes and Villains to get in before any real damage can be done. Each and every Rikti defeated atop the ship will award a Vanguard Merit to any player or team who dealt 10% or more damage. Since the Rikti are constantly teleporting to the top of the ship, there is no limit to the number of Vanguard Merits that can be obtained this way.

About the ship, players can find grates blocking access to the ship's ventilation system. Within some of these vents, clickable bomb glowies exist. Nearby Rikti troops will be aggroed by any attacks on a grate, which makes this part of the battle a dangerous job. Successfully planting a bomb will add to the amount of time the ship's shields will remain down. When the bomb is planted, a message will appear on the screen to notify all players on the team of whoever plants the bomb and a large explosion will soon follow. Anyone - heroes, villains, and Rikti all included - in the blast radius of the bomb will take damage from the explosion. This part of the raid also brings out numerous Rikti Magus (Elite Bosses).

Once enough bombs have been placed on the ship and enough Rikti have been defeated on its surface, the Master At Arms U'Kon Gr'ai will be spawned in the sunken middle area on top of the mothership. U'Kon Gr'ai is a Giant Monster, and it may take several teams to defeat him. The site of the Giant Monster spawn is filled with level 54 Rikti, making fighting him in this area particularly challenging. A popular tactic is to pull U'Kon out of the bowl and up into either the area between the grates or to one of the the typically less-populated areas on the East or West side of the ship. Successfully defeating U'Kon Gr'ai will add to the amount of time the ship's shields will remain down.

The following scenarios will cause the shield to regenerate:

Upon shield regeneration, all 18 pylons respawn. A volume trigger will teleport all raid teams to Point du Hoc, and the raid cycle starts over again.

Retrieved from "https://cityofheroes.fandom.com/wiki/Rikti_Ship_Raid?oldid=76648"
Community content is available under CC-BY-SA unless otherwise noted.