The Shivans are mysterious entities with a very localized area of action: The island of Bloody Bay. These protoplasmic entities can be found in that place only. Shivans are present in City of Heroes and City of Villains through a common zone, Bloody Bay, and spawn usually at low-mid level 20s. Remember your character will be exemplared while in Bloody Bay.

For those who dislike PvP action, Villains have also the possibility to fight them in a regular mission.

The Shivan Shard temporary power will summon forth a Shivan Decimator as a pet.

As their world collapsed around them, desperate scientists fired thousands of probes into space warning of a massive entity poised to devour their very world. The Arcosians knew that this scourge would eventually reach other solar systems and hoped the tiny blue planet called Earth could avoid the same catastrophic fate.

Hundreds of years later, Australian Kurrin Wirake set out on a traditional pilgrimage along his ancestral songline, a dreaming trek connecting the landscape of his aboriginal people to the mythic episodes that occurred at specific locations during the ancient dreamtime. According to his people, the Earth retains a memory of its own origin. This memory echoes across the modern world and often manifests as a guruwari, or “seed of life.” It was during his search for this vibratory echo of the Earth’s creation that Kurrin instead found warning of its possible destruction. In the shadow of the famous rock, Ularu, Kurrin uncovered one of the pods launched over 800 hundred years before by the doomed Arcosians.

The pod might have remained in Kurrin’s remote village forever if an Australian AWACS plane had not flown directly over it. Performing a simple test flight, the Airborne Warning and Control System surveillance equipment picked up an unusual signal emanating from Kurrin’s village. The Australian military investigated and confiscated the pod from the angry villagers, then called on allies from NASA to help decode its alien signal.

The lead cryptologist, an Indian woman named Seetha Neremanu, deciphered the code in a matter of hours. Dr. Neremanu immediately alerted the UN Security Council that a gigantic planetary devourer was heading our way. The thing’s name was unpronounceable in human speech, so Dr. Neremanu named it Shiva, after the Hindu deity “Destroyer of Worlds”. Shiva, Seetha added, would reach earth within a year.

With the help of secret alien technology owned by the Russian government, the UN gathered a multi-national force of superheroes to confront this imminent danger. Dr. Neremanu called this band of heroes Operation Vishnu, the “Preservers”, which consisted of Russian, American, Chinese, and French volunteers. Set to annihilate Shiva with a nuclear strike, Operation Vishnu launched late in the summer of 1989.

A blast was detected and Shiva disappeared from deep space detection system, but the heroes who guided the rocket to its final target were never heard from again.

That same summer, the infamous meteor shower of Bloody Bay began. It wreaked havoc on the island, causing not only direct damage but radiation sickness and other, more sinister maladies as well. Perhaps strangest of all, weird energy from the meteor formed around the corpses of the dead and created protoplasmic entities filled with Shiva’s destructive rage. Those few who know of Shiva wonder if these new creatures, the “Shivans”, are somehow trying to reassemble the pieces and resurrect the Destroyer of Worlds.

Even more amazing, some of those who have investigated the Shivans and their meteors claim that tendrils of the fragments reach for miles across the island. There is some evidence that a giant tree near the nexus of these tendrils might somehow be absorbing the energy, though what this means none yet know.

In the wake of such destruction, Arachnos evacuated those they could, then abandoned the rest. The island lay in ruins for many years, a stepchild left to rot by an uncaring Lord Recluse and an international community too timid to enter his domain.

But recently, it was discovered that the meteor granted amazing properties. Some who were exposed to it even gained phenomenal superpowers. Arachnos quickly returned in force, as did scores of desperate explorers and excavators. Longbow could not allow Lord Recluse to have exclusive control over such a powerful resource, and also sent in a team to cordon off the island as a “humanitarian effort” to save those Arachnos had abandoned.

Now heroes and villains fight over the meteor shards, collecting samples as freelance agents to avoid direct conflict between Longbow and Arachnos that could touch off World War III. Unfortunately, this limited engagement is dramatically slowing down research that might reveal if the meteors are indeed pieces of Shiva, and why they are seemingly connecting to the ancient tree at the isle’s center.

These mysteries must be solved, for if Shiva does indeed reconstitute herself, she will certainly feed first on her host—Earth.

All Shivans have a 40% Energy Resistance.

These horrible things are an amalgamation of human corpses and some sort of weird sentient goo from beyond the stars. Some claim a mysterious interplanetary intelligence thought destroyed in the 1950s is the source of the Shivans, but if such a creature existed, "Shiva", the Hindu name for the "Destroyer of Worlds" was kept secret by the governments of Earth. 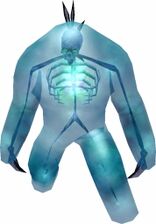 Smashers are larger versions of the Shivans seen all over Bloody Bay. How the beings formed from the bones of the dead is a complete mystery. 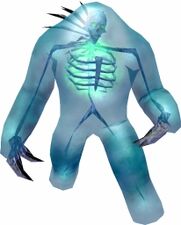 The largest of the Shivans are the destroyers. They seem little more than ectoplasmic jumbles of destruction and hate. 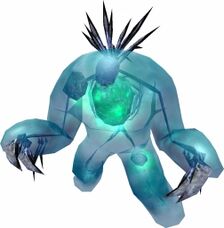 This Decimator seems to pulse with ectoplasmic destruction and hate. Its grotesque form and radiant energy makes your skin crawl. 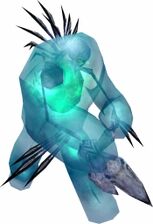 Retrieved from "https://cityofheroes.fandom.com/wiki/Shivans?oldid=89362"
Community content is available under CC-BY-SA unless otherwise noted.