This article is about the hero Statesman. For the game developer, see Statesman (Developer).

Statesman is a Hero, one of the Surviving Eight and the leader of the Freedom Phalanx.

Statesman was previously the contact for the Ms. Liberty Task Force.

Statesman is one of the first heroes of Paragon City. He is the leader of the Freedom Phalanx as well as one of the co-founders.

Instead of coming home in 1918, Marcus went in search of the fabled Well of the Furies. During the war, he had been exposed to Mustard Gas and become ill. He knew that he would prematurely die if he did not find the Well. Friends from his unit joined him in his search including Marcus's best friend, Stephan Richter. They became mercenaries trying to help Marcus find more information on where the Well of the Furies was and how to unlock its power. They were eventually successful and both Marcus and Stephan drank from the Fountain of Zeus within the Well of the Furies, giving them super powers. They would turn out very differently however, as Marcus became Statesman and Stephan became his mortal enemy, Lord Recluse.

Upon his return to Paragon City, Cole claimed to have unlocked the power of his own "Inner Will", an obscure explanation at best. While not his true origin, it was undeniable that Cole possessed something that hadn't been seen since the age of the Greek Heroes: superpowers. Cole was strong beyond human limits and impervious to fists, knives, and even bullets. However he'd come by these powers, Cole now found a cause to which he could apply them: saving his beloved Paragon City from itself. The would-be hero took on the name Statesman, an identity that personified all the values and ideals that Paragon City currently lacked.

Statesman went after crime head on. Going after gang bosses, corrupt politicians, and other lowlifes with a vengeance. His costume allowed him to hide from police while still leave behind an indelible impression on the city's populace. In a few short months he had begun to make a difference. But his initial successes only served to unite the city's criminals against him. The tide began to turn when out of nowhere another costumed hero appeared in the city: the Dark Watcher. Soon after others appeared: Elementar, Vambrace, Maiden Justice, and others. Extraordinary men and women, inspired by Statesman's example, were rising to meet the challenge.

On July 4th, 1932, Statesman collected these new heroes under the banner of the Freedom Phalanx. The group battled together throughout the 1930s, taking down numerous criminal operations, including the gangs ruling Kings Row. Statesman's successes led to the Crime Fighting Act of 1937, which made the Freedom Phalanx a legally recognized crime fighting organization.

When Axis forces attacked Paragon City in 1941, Statesman and the Freedom Phalanx were at the forefront of a heroic effort to push back these invaders. The heroes then traveled to Europe, where they fought alongside the Dawn Patrol and other super-powered soldiers for the freedom of the world. On D-Day, Statesman and his allies became engaged in a violent battle over the beaches of Normandy. Due largely to his heroic efforts, the Axis forces were eventually pushed back, allowing the Allies to move into France. Unfortunately, Statesman was terribly wounded during this battle and remained crippled for the remainder of the war. This did not keep him completely out of the fight, however: the day after Hitler's suicide, Statesman planned what would be a final assault on the Storm Korps headquarters and one of the last superhuman battles in WWII's European theater (now known as the "Battle of the Black Forest"). The Allied heroes captured most of the Storm Korps, signaling an end to paranormal hostilities in Europe.

Unfortunately, Statesman had little time to rest after the victory in Europe. Back in the United States, the villain known as Nemesis had reappeared, capturing most of Washington DC and forcing the Chief Justice to declare him Emperor of the Americas. Immediately, Statesman led the Freedom Phalanx and many other heroes back to the States to challenge Nemesis. They discovered that his terrifying plot included planting nerve gas bombs throughout at least twenty American cities. With the aid of Dr. Mnemonic and Sister Psyche, the heroes eventually created an antidote to the nerve gas and vanquished Nemesis and his robot hordes.

Statesman has remained active since World War II, with each decade bringing forth new foes and challenges. In 1976, he was nearly killed by a Soviet tactical nuclear missile while trying to rescue a downed American pilot. During the 1980s, he joined the Freedom Phalanx on expeditions into alternate dimensions and eventually battled the Reichsman, an evil version of himself from a reality where America had lost to Nazi Germany. After the fall of Communism, Statesman served as an advisor to the first independent Russian hero group, the Valiant Defenders of the Motherland, which made its appearance in 1993.

And, of course, in 2002, Statesman rallied all other known heroes in an attempt to repel the Rikti invasion. During the initial conflicts, Statesman hurled his body into Rikti craft, destroying the landing ships before they could release their soldiers. He was one of the few heroes who survived these early confrontations, and was later appointed to the United Nations' Vanguard superhuman response team as a member of its "Elite Five." At the climax of the war, Statesman led a group of over a thousand heroes from around the globe on a frontal assault of Rikti troop concentrations. The battle took the lives of 800 heroes, although Statesman again escaped death. Despite the high toll, this assault was simply a diversion to allow a second, much smaller team of heroes to enter the Rikti's home dimension and destroy the energy source that powered the invaders' dimensional portals. The combined efforts of Statesman's so-called Alpha Team and the second, Omega team provided Earth's first major victory against the Rikti.

Statesman is one of the few established heroes left alive and it is believed that he continues to lead a version of the Freedom Phalanx, which presumably includes other members of the "Surviving Eight" - eight prominent heroes who escaped the Rikti invasion with their lives. He also retains his post among the Vanguard's Elite Five.

Statesman's sidekick is his granddaugher, Megan Duncan, who is also known as Ms. Liberty. A fully-fledged hero in her own right, Ms. Liberty has taken up the mantle of her grandmother, Maiden Justice, and mother, Miss Liberty. She leads the Vindicators and formed a military division of Freedom Corps named Longbow.

Marcus Cole, aka Statesman, began his transformation from a poverty born child to world hero after serving in the U.S. Army during World War I. Instead of coming home in 1918 he headed east, bent on exploring the world now that he'd had a taste of it. Where he went and what happened to him during that lost decade remains a secret to all but Statesman's most trusted friends. What is no secret is that when his ship pulled into Paragon City port in 1931 he was much more than the young private who had shipped out to fight for freedom in Europe.

Hammer of Justice is a PBAoE smash attack which is similiar in effect to Footstomp from Super Strength, but does Knockback instead of Knockdown with a punch to the ground instead of a foot. Zeus' Lightning Bolt is a large energy PBAoE with a short timer which is used when Statesman's health is low enough for him to activate Unstoppable from Invulnerability. Once it is unlocked, Statesman will use it at any time it is recharged even if his health goes back to full.

Please note that the version of Statesman from Maria Jenkins' mission, Free Statesman, does not possess Zeus' Lightning Bolt or Hammer of Justice. Instead, he possesses Thunderous Blast. In addition, he is also classed as an Archvillain rather than a Hero.

Statesman first appeared in City of Heroes #1 from Dark Horse. [1]

The Web of Arachnos[]

Statesman's origin is covered in The Web of Arachnos by Robert Weinberg. 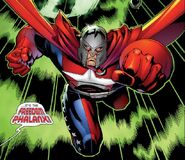 Statesman as drawn by David Nakayama
Community content is available under CC-BY-SA unless otherwise noted.
Advertisement