o.o of what? my ears sticking out of the head piece of a crey PP? o,o be more specific. At this time, the only new thing are the costume temp powers. Everything else is the same. @.@ I was told last month that there where new costumes, but having been in testing today, I have a feeling that they meant the temp powers. (though, I was also told event salvage would be involved, so we'll see.)--Sleepy Kitty 19:29, 18 September 2007 (EDT) 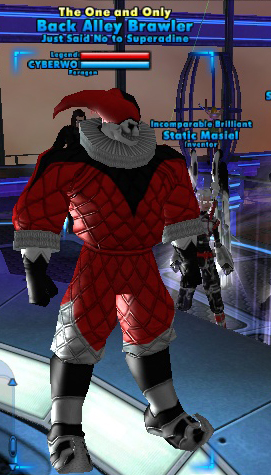 Made the thumbnails for the costume pics to be links to pages for the powers. Invented the "Halloween Costume Powers" under CoH/CoV Temporary Powers, and moved the pages for the individual powers under there instead of out in the barrens of the Temporary Powers page... --Jumping Jack 14:56, 23 October 2007 (EDT)

It appears to me that you'll get 2 inspirations when you get a costume drop, so that might be a way to keep track of your dup costumes. -- StarGeekTalk page 01:09, 24 October 2007 (EDT)

After reading this, I started watching more closely for the duplicate inspiration drops. Sure enough, 2 every time I got a new costume. Further, two inspirations but no costume on the Fashionable badge, which would confirm that the double inspiration drop was indeed a duplicate costume drop. --Eabrace 11:47, 24 October 2007 (EDT)

So many of the costume pictures have either power animations (glows, etc) or are too dark to distinguish shading easily. Perhaps if they were taken within a super group base, or in one of the areas not participating in the halloween event? --Jumping Jack 14:18, 24 October 2007 (EDT)

I know one of the costume pics I took is too dark for my liking. (Image:Crey Agent Costume.png) If someone else hasn't replaced the image, I'll take another screenshot of it tonight. For a couple of others that I uploaded, I just ran inside the Portal Corp building which is illuminated. - Snorii 15:37, 24 October 2007 (EDT)

I've been using Irfanview and it seems clunky since I'm used to Photoshop. I really need to find that disc so I can load it onto my new computer. Thanks for doing that, it looks a lot better. - Snorii 20:03, 24 October 2007 (EDT)

Where are the maps for the GM spawns in CoV? I see most of the CoH maps but zero CoV maps. --Emjaybee

That's because no one has decided to step up and work on them. I don't play villain side, so I have no interest in making maps for it. There certainly is nothing to stop you from making some maps, Emjaybee. Sorry if I start to sound snarky, but all I see are complaints about the maps. -- StarGeekTalk page 18:05, 28 October 2007 (EDT)

Retrieved from "https://cityofheroes.fandom.com/wiki/Talk:Halloween_Event_2007?oldid=70597"
Community content is available under CC-BY-SA unless otherwise noted.