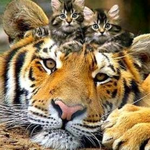 Although most of Paragon City's citizens believe Lord Xenophon to be a necromancer, he is in fact an outer-planar being, called a Rakshasa. He often takes the form of a middle-aged Human male and limits his spellcasting mainly to necromantic spells, in order to maintain the illusion that he is from Earth. He refuses to use spells which create or control undead, but has been known to summon lesser beings from the outer and inner planes, most commonly a Dark Servant from the plane of Shadow. His use of necromantic magic is only a schtick, however. He has actually mastered nearly every kind of magic and limits his spell use in his Human guise only so that he can pose as a Dark Defender.

Lord Xenophon spends most of his time out of the public eye, lurking about the Legion of Catgirls base. There, he prefers to take the form of an elderly tiger who cares for, defends and instructs the kittens.

He also commands an army of heroes from there. The heroes who take their instructions through his Crystal Ball of Clairaudience are many and varied. They include many catgirls (such as Coffeecat[1], Hip Cat[2], Felis Nictus[3], Kyudo Cat [4], Polar Cat [5], etc.) He also has many arcane disciples (Lord Aargwyyth [6], The Raving Redhead [7], Lord Vaxilander [8], Sarah Belham [9], Emo Cat [10], The Sand Sorceress [11], etc. He has also created two golems (The Helmed Horror and The Jade Golem [12]), summoned other powerful, extra-planar beings to defend Paragon (Mt. Vesuvius [13], Hell Kitten [14], Sweet Ifrit [15]. In his travels through nearby dimensions, he has met many other heroes who have followed him back to Paragon City (Doc Toro [16], The Kender Gardener [17], The Sunite Sorceress [18], Qilue Baenre, Feather Jalanil [19], etc.) Many unrelated heroes have also chosen to follow Lord Xenophon (Gym Teacher Man [20], Maiden Japan [21], Sturdyman [22], Tim Possible [23], Neutron Burst [24], The Garden Weasel [25], Mr. Arizona [26], Senor Habanero [27], etc.) He once accidentally released an avatar of a fansite webserver into Paragon City (The Game Amp [28].) These are just a few examples; many more heroes also follow Lord Xenophon.

In addition to commanding this impressive force, Lord Xenophon is also an accomplished supergroup base architect, responsible for most of the small outposts of the Legion of Catgirls and many other small supergroups, as well as a few main bases. He is the LoC's Server Alpha for the Triumph Server. He is also the founder of the Circle of Skulls, an organization of wizards who oppose the Circle of Thorns.

Retrieved from "https://cityofheroes.fandom.com/wiki/User:LordXenophon?oldid=78314"
Community content is available under CC-BY-SA unless otherwise noted.