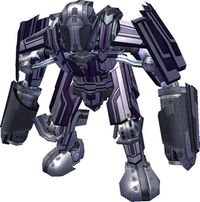 Additionally, players can earn the ability to summon one with the Vanguard Heavy Power Core power.

Vanguard is a group backed by the United Nations, and headed up by Lady Grey. Their soldiers are specifically outfitted with Impervium armor and with high tech as well as magical weaponry to fight the Rikti. Everything they do is centered around containing the Rikti menace on our world.

Retrieved from "https://cityofheroes.fandom.com/wiki/Vanguard_HVAS?oldid=68077"
Community content is available under CC-BY-SA unless otherwise noted.